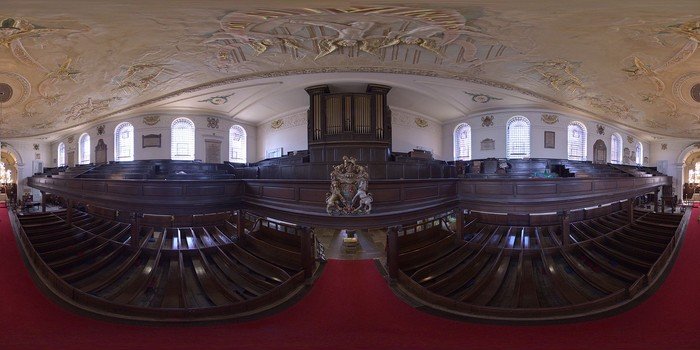 In 1733, the old medieval church was in poor condition and a new building programme was commenced, creating the current church designed by John Price. The foundation stone for the current church was laid by the rector, Dr. Nathaniel Hough, on St. George’s Day, 1734. The rebuilding was financed by £6,000 taken from funds for the building of fifty new churches from the reign of Queen Anne (1710-1711) authorized on 24th June 1733 by an Act of Parliament. This grant wasn’t sufficient, so a subsequent levy was raised, presumably on parishioners, of one shilling to the pound to pay for the organ, clock and font. The new Georgian church was opened on April 25th 1736 and is made from red brick with Portland stone pediments, string courses and dressings with the dimensions being 110 feet in length and 52 feet wide. This is the current church on the site today.

The first major restoration work on the present church was commenced in 1807. An 1806 survey by S.P Cockerell described the exterior of the church as highly decayed. Work to the value of £9,000 was undertaken by William Hedger on both the exterior and interior and began on March 29th 1807. The church was closed during these repairs until October 16th 1808. New foundations were made for the church, as well as many interior changes. A curious note in the Vestry minutes shows how the Restoration Committee celebrated their work; they spent their profits and dined ‘together at the City of London Tavern on Thursday 20th October’.

In 1930, some repairs were made to the tower, spire and crypt. However, by 1938 the church was in poor condition. An architectural report from that date describes a bulging and cracked south wall, gallery supports that were out of upright and rotten and the walls resting on old piles. The south wall was strengthened in 1938. Major restoration and redecoration works were planned to take place externally and internally in 1939. However, this work had to be scaled back for financial reasons and was not finished until 1951, due to postponement during the Second World War.

During the Second World War, there was extensive damage to the building due to bombing. Extensive rebuilding was undertaken by Thomas. F Ford in 1951-52.This included extensive exterior and interior restoration, building on the restoration plans from 1939. The church was closed for the restoration from New Years’ Eve 1950 until rededication by the Bishop of Southwark on 16th October 1952. The restoration cost £33,000 and during the restoration, the congregation worshipped at St. Michael’s Church, Lant Street.

During the post-Second World War era, the independent parishes founded in the 19th century were gradually reunited with St. George’s parish. St. Michael’s and All Angels was reunited in 1953. St. Stephen’s was reunited in 1964. In 1976, St. Jude’s church closed and the parish was amalgamated with St. Paul’s. In 1965, the population of the parish was 5380 and in the same year the church conducted 37 baptisms and had 106 Easter Communicants.

In the summer of 1991, St. George’s benefice was joined with that of St. Jude’s. Some of the parish of St. Saviour with All Hallows (Southwark Cathedral’s parish) was annexed to St. George’s, but part of St. George’s parish was transferred to Holy Trinity with St. Matthew. With all the parish boundary changes, St. George’s commissioned a survey entitled ‘Parish and People ‘92’, which aimed at studying the new parish boundaries and population make up. This survey was conducted by members of the congregation.

St. George the Martyr and the church of St. Alphege have had a strong relationship with each other. St. Alphege was formed due to a Diocesan mission- parishes formed from mission districts, college or school missions. Originally, it was formed as a sub-parish of St. George the Martyr, with a chapel being built. It was described as ‘a poor parish in the middle of poor parishes’. A permanent church was built on Lancaster Street in 1882. This building was declared redundant in 1983 and demolished in 1991. In 1992, after the death of Fr. Eric Mathieson, the last independent incumbent at St. Alphege’s, the incumbencies of St. George the Martyr and St. Alphege were united under one priest. There had been a long standing agreement that when Fr. Mathieson retired or died, the parishes would unite. On 12th January 1994, the PCCs from both churches voted in favour of uniting the parishes together, and this was. Provision was made for a space for the congregation of St. Alphege to worship on the ground floor of. St. Alphege Hall, on King’s Bench Street. This was renovated in 1993 and reopened in 1994. The hall was still in occasional use up until around 2011, with it being rented out and used for services. In 2017, it was rented out to an estate agent, being a useful source of income for St. George the Martyr. In around 2004, the parish boundary was adjusted slightly eastwards to include Manciple Street where the current Rectory is located, as well as other areas.

By 1999, there were concerns about the safety of the church structure, as the walls were gradually sinking into the soft earth below causing extensive structural damage. By 2000, the architect was concerned that widening cracks would lead to the collapse of the walls. Large scale restoration began in 2005-07, removing and restoring all fabric in the church. An internal steel frame was inserted underpinning the walls, as the walls were moving and there was a danger that the nave ceiling would collapse. A new crypt space was designed and built, utilising the whole space under the church. The church was closed during this restoration work and the congregation worshipped at King’s College University Chapel, Guy’s Campus. This was the last large scale restoration work on the church.